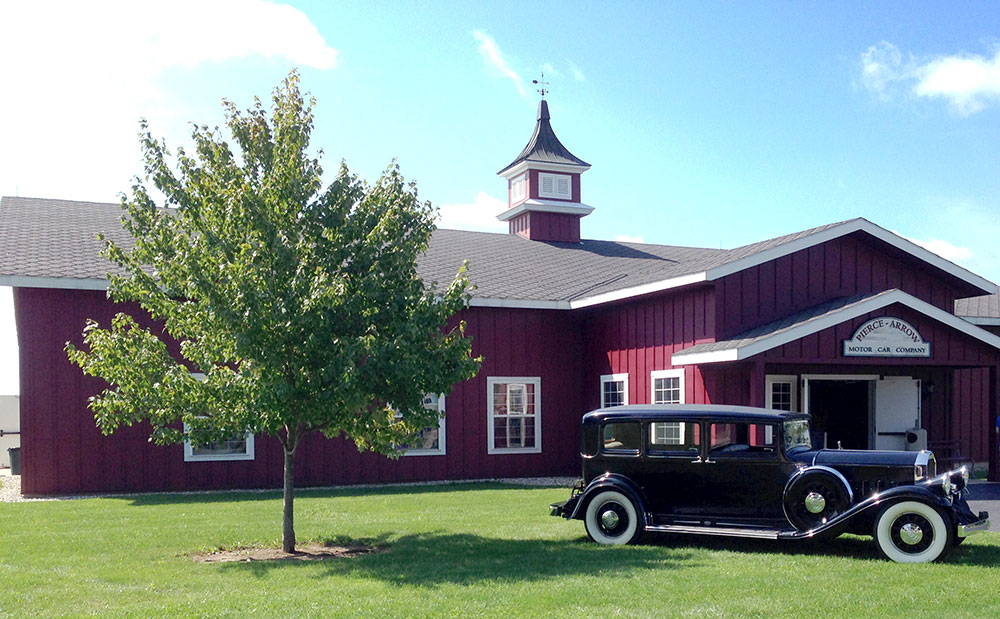 We’ve all heard that it’s not the dates on a tombstone that matter, it’s the dash between the dates, or, in other words, the life that was lived.

But what about the dash sometimes found between the words Pierce and Arrow?  Is there any significance or meaning to that dash?

The story of George N. Pierce is well known to Pierce-Arrow enthusiasts.  The Heinz, Pierce and Munschaur Company was started in 1865 to manufacture household items, the most well known of which are bird cages. In 1872, George N. Pierce bought out the other two gentlemen, and changed the name to George N. Pierce Company. Manufacture of ice boxes followed, and in 1896 bicycles were added to the product offerings.

Many bicycle companies at the turn of the century were soon expanding into new-fangled automobile construction. Among them were Pope Manufacturing Company with the makes Pope-Hartford, Pope-Toledo, Pope-Robinson, Pope-Tribune, and Pope-Waverly,  the Duryea brothers, and the Winton Bicycle Company (renamed the Winton Motor Carriage Company in 1897).

The head badge of the Pierce bicycles featured an arrow as part of the design, although the word “arrow” was not used in the badge.  Motor car manufacture began in 1901 with a single cylinder vehicle, and it was not until 1903 that a Pierce model was marketed as an “Arrow”, a new two cylinder vehicle.  In 1904, a much larger, four cylinder, car was marketed, and designated as a Great Arrow.  There was still no dash in the name, however.  The “Arrow” (and slightly later the “Great Arrow”) was being used as a model designation, not part of the marque name, which remained Pierce.

The company was very successful, but working out of a smaller manufacturing facility at 622 Hanover Street in Buffalo, where the bicycle manufacturing had grown.  The noted architect Albert Kahn designed the Pierce Arrow factory complex in 1906, and the 132,970 square foot structure was built at 1695 Elmwood Avenue.  There seems to be no mention of the pace of construction, but it must have been forthwith, as the building itself is featured in 1908 advertising.

In 1907, George N. Pierce was 61 years old, and sold all rights to the company.  He would pass away from a heart attack three years later.  In 1908, the company was renamed The Pierce-Arrow Motor Car Company, seemingly the first time the now-famous dash appears.  As one studies the period advertising, it can be seen that the dash is not used in ads that are by the George N. Pierce Company, but do start to appear in post-1908 advertising.  For the first few years after 1908, however, there’s no consistency of the dash use.

The dash does not appear in any motorcycle advertising, of course, because it was not a “Pierce Arrow” motorcycle, but rather just a Pierce motorcycle.  As has been mentioned, the name of the new organization was the Pierce Cycle Company, so no dash is needed.

The dash seems to become evident in the majority of advertisements starting around 1911, but examples of “no dash” can be found in ads of the 1920’s.  By the 1930’s, the dash seemed to be in every advertisement.  However, in the late 1930’s, an ad shows up with no dash, but a dot.

Stock certificates of the 1930’s have the dash, both in the name and the printed seal, so it would seem it was official by then that the dash should be used.

Then, in the late 1930’s when the Travelodge was built, the dash disappeared again, as shown on upholstery tag from a trailer sofa cushion shown on page 6.